A Bike to Kobwin 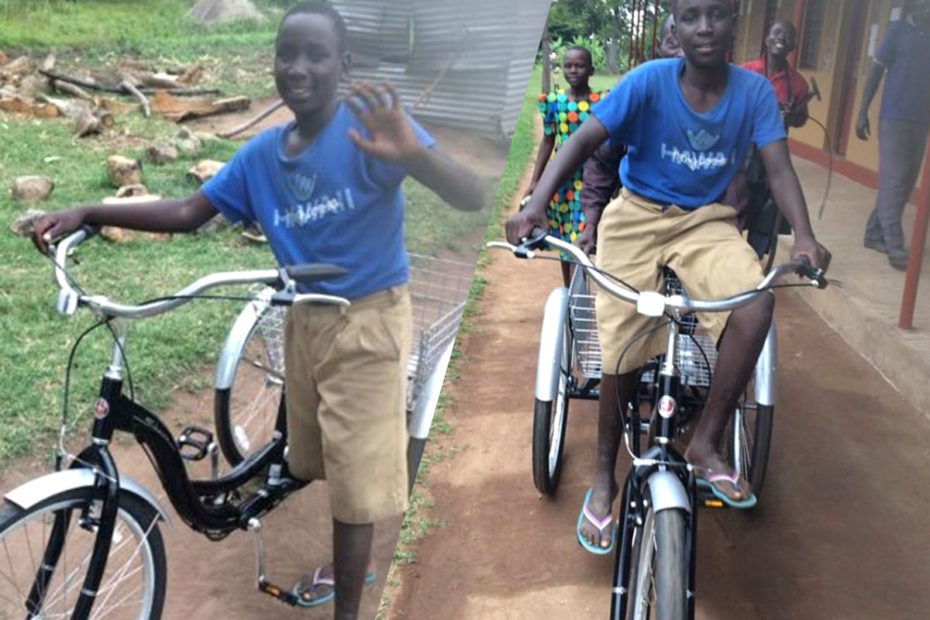 Preface: Kobwin is a small school/Childrens Center in Central Uganda that was developed to aid and rescue children soldiers and child brides of the evil Joseph Kony, the leader of the Lords Resistance Army, (LRA) a guerrilla group that ravaged Uganda back in the 2012 and before. Look on YouTube under KONY 2012 and see the horrendous story.

I’ve visited and served here at Kobwin several times. Twice on a Medical Mission trip with lots of nurses and a Doctor doing a “clinic” out in the field where people came for miles to be seen by a doctor. It was amazing. Then once with a group of 5 women who brought books and school supplies and clothing & medical supplies and painted a mural and did other helpful projects.

It’s always a joy to go on the long bumpy journey to visit my friends and stay awhile.

On our last trip we delivered an adult trike to a 10 year old boy with a lame leg who had been given a malaria shot as a baby unfortunately right into his sciatic nerve. This damaged it and caused severe pain for years. He walked with a straight “peg-like” gait. He finally at about age 7 or 8 years old had surgery to fix the pain but never got Physical Therapy so the muscles and tendons were underdeveloped and he still continued to walk with a straight leg. This bike was promised and I knew I had to find a way to get it to him. I prayed and lamented over this for months.

Finally a breakthrough, a friend who goes to Uganda regularly said he would take it to him for me. I was so relieved. I purchased it on Amazon for $399.  Some of the money came from our kids at church bringing their tithes in specifically for this trike. Unfortunately my friends’ trip got cancelled and there sat the bike. Now what??

I just knew that this little boy was thinking “I doubt I’ll ever get this promised bike”.

After my team & I bought our tickets to go to Uganda in June of 19’ I began calling the airlines to see if they would do humanitarian service and let us ship this bike for free to go with us. They agreed and we celebrated!  Now to really strengthen the box and get extra inner tubes, and a wrench, some grease and a few extra rubber washers, a lock etc… We brought it all with us. The huge box took 2 of us to carry and weighed 70 pounds but we were so excited to deliver his bike to him and let him get the leg exercise he so badly needed.

Arriving at Entebbe the airlines lost most of our luggage for almost a week, every single thing gone except we had our carry-ons. When it was finally delivered to us the bike was still missing. I have to admit we were so discouraged. But, after a few more days it finally arrived but too late for us to deliver it. So it sat at an orphanage 8 hours away but we were promised they would find a way to get the bike to him.  It took a couple months after we returned to America when we finally got pics that he had received it and LOVED it!  Oh Lord you are so good, please bless this young man and develop his muscles and give him joy.